You Are Not George RR Martin: how to get published in the grimdark era of fantasy

Before last year, I used to want to hear what authors had to say about how they managed to get published, and when I attended events or asked them online, they generally didn’t have much to tell me. To some authors, it seems that getting a publishing deal almost happens by chance – or at least that’s what they’d like you to think. The truth is much different.

I’ve been fortunate – no, let me rephrase – I’ve worked very hard – to get my deals, and on the way, I’ve learned a few things. In this post I’m hoping to share with you some of the thoughts I have about what I did, and what I’d do again, if I were an unpublished author. I’m now happy to have seven deals across six different languages.

This blog is for you if:

If you don’t agree with what I say here then that’s cool, you don’t have to and you’re entirely free to go about getting your own deals in any way that you wish. All of my advice here is based on the 15 years of mistakes I made as I was trying to get published. There will probably be another 2-4 blogs on this topic, as it’s far too big to get into one. I won’t focus on grimdark in this one so very much, because these fundamental principles need to be laid down first.

Woah, just hold on there buddy.

Most fantasy writers believe that they are writing a series. Maybe they are, or maybe they aren’t. I ran a Straw Poll on Reddit Fantasy Writers once that asked whether people were writing a stand alone or a series, and 85% of the 350+ who responded said yes, but only 10 had finished a series. Food for thought. But even if you are a finisher, here are some excellent points that will save you time in the long run:

If you are currently unpublished, nobody wants to hear that you’re writing a seven-part series

By completing a stand-alone novel that has a complete story arc, you can prove to an agent that you can finish a story. Part 1 of X does not achieve that. Consider this flyover. It’s spectacular. It’s not finished. It doesn’t go anywhere, and until it does, it sucks as a road. 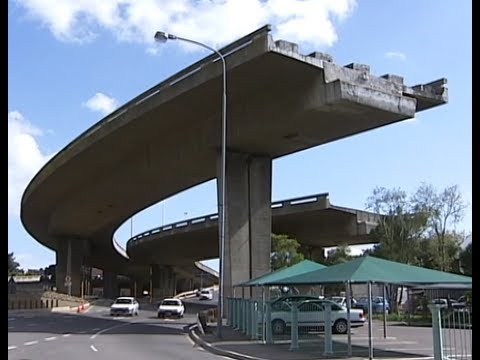 A stand-alone novel can become the first part of X. BLACKWING is part 1 of 3, but if people enjoy it then I’m hoping to follow up with a further trilogy, or who knows? Maybe in the future it will be time for the 10 part mega-series. But the time is not now.

GRRM did not start his career with ASOIAF. He had already been writing professionally, with TV and literature publication, for over 20 years when he pitched the first chapter of A Game of Thrones to his agent who he already had.

If you are naming your series/trilogy with any of the following words then you are probably in a bad place:

For The Raven’s Mark books, the series title didn’t even exist until several months after I signed contracts with Gollancz and Ace.

We all tend to want to write fantasy because something inspired us and that’s usually another fantasy writer. But if you’re looking to break through into the massively competitive fantasy genre, then you need to choose your inspiration carefully.

Go take a look at this list to get a look at the kind of thing that agents and editors have chosen to pick up in the last 1-3 years.

Looking down the list, the first 9 we have can be loosely described as:

Now, I strongly recommend you go read this list, not only so that you can see my book on it, but so that you get a really good idea of the kind of ideas that are getting into print right now.

Where are all the Westeros clones?

Here’s some good news if your heart is sinking at this point: you don’t have to be writing your publishable novel yet.

Or, if you’re a slow learner like me, write 1.5 million words.

BLACKWING wasn’t a book that just popped into being overnight. Nor did it start when I typed the first chapter in 2015. BLACKWING came about as the result of fifteen years of nearly constant writing, day dreaming and ploughing through storyline after failed storying.

Here’s a brief timeline of my writing career to date:

Writing is like playing the guitar, except whilst we understand that you have to learn to play the guitar, everyone believes that they can write a novel.

We all know people who do the whole “If I wasn’t in my career I’d probably be great at yours.” They are well meaning people, even if they have no idea what they’re talking about.

One million words. If you want serious publication, you have to expect that you’re going to be quite a bad writer until you get there. Maybe you’re one of the exceptional few who aren’t, but for most of us, there’s a long, long way to go.

Personally my goal was to be a successful, published writer by the time I was fifty. That gave me thirty years. You can become good at anything if you give yourself thirty years, biology aside. I’m never going to be a power lifter, but we all have it in us to write if we practice and give ourselves the time.

You want to be published? That means that you’re going up against me. You’re in a battle for sales with me now, and if you want to fight, you have to understand the war. I’m willing to work long hours and slog when I have to slog, and ultimately, I’m always going to blame myself if I don’t produce something that’s good enough. Are you prepared to do that? Then good. Welcome to the front, soldier.

The following are all, without fail, bad ways to look at things:

“The market is oversaturated. I’d be published if…”

The market is very competitive. But you’ve entered it and if you want it enough, give yourself your thirty years. Assuming you do your homework and write query letters in the right way, never, ever, blame anything other than your own writing ability. If I had not sought constant improvement over those fifteen years and had not assumed that it was my prose and plots that weren’t up to standard, I’d never have gotten anywhere. I’d still be writing ASOIAF clones.

“I don’t think agents are actually reading my work.”

They are. But if all you’re getting is standard rejections then it’s your work that’s not up to scratch. When I sent out my first 12 samples for BLACKWING I recieved 4 requests for full manuscripts. On previous attempts to find publication for three novels I had received only the standard slip in the post for 20+ submissions. There’s a strong chance that even if your book is quite good, if you only get standard rejections then at the very least, your opening is not gripping (in a future blog I will deal with writing a good opening).

“I don’t want feedback on grammar mistakes, tell me about plot and character.”

No. If you play me your song on the guitar but you can’t play all the chords perfectly, I can’t enjoy your song and I don’t care about the melody. Go practice and come back when you’re competent at a basic level.

“I know it’s long and slow, but so is Tolkien.”

He also wouldn’t have been published in the modern market. You’re not writing for post war Britain, you’re writing for the modern world. So write for it. One of the major mistakes new fantasy writers are making is trying to emulate authors of the past, instead of understanding what’s selling today.

This is both a Yes and a No. Consider also that this guy has been trying to get Wayne’s World 3 made for the last 23 years:

There is, to some degree, a barrier created by agents and publishers and yes, you’re relying on their tastes.

This ends part of 1 of this absurdly long blog. Next time I’ll look at writing a good opening. Probably. But probably not good endings. I’m not so good at finishing things off because

I am a fantasy fiction writer and historical European martial arts enthusiast. I spend my days reading about swords, writing about people swinging swords and swinging swords at people. Find me at www.edmcdonaldwriting.com ! Like my page at https://www.facebook.com/edmcdonaldauthor/ Follow me on Twitter!

3 thoughts on “You Are Not George RR Martin: how to get published in the grimdark era of fantasy”