Writing processes: everyone’s is different. What works for one may not work for others. It’s always best to be ultra-cautious when giving out ‘writing advice,’ since you don’t know whether what you suggest might actually be damaging to someone’s own methods, or might be taken as gospel when it’s only a suggestion. So rather than advise, this is just what I do, and what seems to work for me.

“Where do you get your ideas?” is a question all writers get asked at some point. And again, and again. It’s not my least favourite question – my least favourite is “How many books have you sold?” because it’s invariably asked by people who have no idea about how many books you’d even expect to sell and have no intention of buying your book, and also because I don’t actually know (I deliberately try not to). But it’s still a pain in the ass, in part because the answer is long, and also because it’s boring.

But where do I get my ideas from?

Every writer stands upon the shoulders of giants, and on the pillars of their cultural background, their education, their personal experiences, and more. But there does come a point where you actually have to try to have ideas.

I am not a planner. I don’t like to plan, I find it tedious, and when I do, what I write rarely ends up resembling what I wrote down in the first place. I find the same to be true of world building. When I try to design a world, it takes me about half a chapter to have discovered something much better to write about, and when I go back to the old file, everything is changed and I can barely remember having come up with the other idea in the first place.

My writing ideas come by writing. It’s generally as simple as that. I start writing, and in the middle of a sentence, I think of something that I want to say, and that then leads to other ideas. Often, the very best things that I devise come not from hours of introspection and meticulous thought, but emerge as one new idea toboggans along into another path that I hadn’t intended.

As an example, let’s take the entire magic system, and plot, of the Raven’s Mark books.

When I first began writing Blackwing, there was something called the Storm Wall. This later became the Range, and the Range Stations that activate it. I didn’t know that there would be stations, or that they would be used to operate it at first. All I knew was that there was something that could be used to defend the home territory against the enemy. The enemy were in fact human, but they also commanded undead. This lasted until my sister pointed out that having a ‘wall’ with ‘undead’ attacking it was all a bit Game of Thrones. However, I digress. While running around on the borders, Galharrow originally encountered a caravan that was under attack, and in defending it met a very old lady who could use some form of magic. And that was all I knew.

When Galharrow first went to Valengrad, I used to go past a pub called The Amersham Arms in London when I was on the train. The Amersham had a red neon sign on the front that said TAKE COURAGE, which is actually an advertisement for Courage Bitter. But I always liked seeing it, and I liked the message, radiating into the night, and so as a throwaway, I tossed in a red neon sign on the citadel. I also liked that the aesthetic reminded me of Blade Runner.

But then, how could there be a single neon sign and no others? How was it powered? It made sense that there had to be other signs. Other lighting, powered by something. So where did that come from? Enter the Talents and the spinning. And once that connection was made, it only made sense that the old woman had been someone who could control the use of the light.

Now I had a world where there was essentially some kind of electricity. It made sense then that the Storm Wall be powered by that electricity (phos), so it was. I still needed some kind of dilemma, something to investigate – so I decided to connect that to the phos too. And who would investigate it other than the old woman? Except I didn’t like writing about her, and so I killed her off and her granddaughter took over. Except that as I wrote the granddaughter, it became apparent that it was much more interesting if the granddaughter was more important from the start, so she stopped being a granddaughter and became Ezabeth. And then when I had Ezabeth, I had Galharrow’s key motivation in hand, and once he was motivated, I needed a reason for him to be embroiled, and so eventually we came to Blackwing.

So effectively what I’m saying is that my ideas come from looking at signs on the front of pubs, writing about them, and then letting them go wherever they want to lead me.

The way that I write is a double edged sword (which is a silly expression, as it implies that you’re going to cut yourself on the back edge). On the one hand, on days when I just don’t know what to do, or I’m “not feeling it,” there is a fairly simple solution: I just choose something and start writing about it. Before long I’ll hit on a particular detail that resonates with me, will catch my interest and spur me forward and I’ll put out 3-5k words. On the other hand, this approach involves a huge amount of overwriting, editing, alteration and reshaping both as the book progresses, and once it’s finished. I’d guess that I put out 2 words for every 1 that I eventually use. Probably more. But while that’s time consuming and labour intensive, I also find it a lot of fun.

Another example of this from Ravencry (no spoilers) is that one day I was stuck, about 25% in. Not knowing what happened next and having made a few false starts, I asked myself what I really wanted to write about. The answer: 17th century English civil war armour. 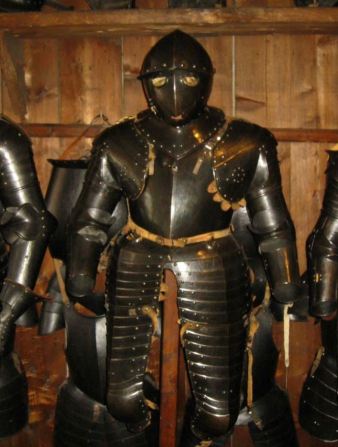 So I wrote about Galharrow getting fitted for a suit of armour. It was easy to write. Naturally, I then needed him to go use that armour, and had Tnota bring a message to summon him. This then introduced a new location and a new monster. Words flew onto the page. Monsters! Towers! Armour! Explosions! All really fun to write. Now, that armour scene got completely cut from Ravencry (my apologies, armour fans) but the location and the monster stayed although both went through several alterations. In fact, the location (the GS, if you’ve read it) became central to the plot, and the monster became a key story element, although again went through multiple iterations, motivations and causes for it both being there, existing, and what precisely it was. But without that deleted armour scene, I’d not have thought of either.

As I said at the beginning, this is not writing advice. Everyone should do what works for them, and if you’re an ‘architect’ then good for you. I’m not a ‘gardener’ really, I’d describe more what I do as vomiting the contents of whatever my brain is interested in today onto the page and then somehow making it all fit into a single narrative. But no words are wasted, even if they’re ones that you don’t end up using in the final product. But on the subject of ideas – for me, the best ones come to me as the result of something else that I’ve written, usually entirely unintentionally.

Ed McDonald is the author of The Raven's Mark series of novels. He currently lives in the UK. Find me at www.edmcdonaldwriting.com View more posts

One thought on “Grinding Ideas”