The clanlands are borne on the backs of their warriors, their diplomats, and low bowing serfs. But whilst men can be fought with steel, the malicious dead can only be battled by those who have trained with the Draoihn of Redwinter, where the blades, intrigue and whispers like thickest of all. But few remain that know the truth on which their survival balances, and it is a truth one girl must bear alone. A truth that would see her torn apart by those that profess to love her. A secret buried deep in the dark beneath…

Something flowed from his fingers and into my skull, cutting, like a knife paring through me. My scream mimiced the shape that seared across my mind,  a canyon gouged a thousand feet deep and filled with flame, a raging, cauterising glow. And then it drew closed, sealing, walls crashing shut. I heard the thunder of his trance as four Gates rose silent and hollow over the scar driven through my mind.

And then it was all gone. Gates, scar, fire. Just gone. And so was I.
But I was not gone.
I was only just beginning.

Hope, sanity, humanity: the Misery takes them all.

A war centuries in the making lies in stalemate across the Misery, a vast wasteland blasted into being when the Nameless tore open the sky.

Ryhalt Galharrow might have preferred to spend his remaining years drowning his past in a brandy bottle, but the republic faces annihilation and he never did like losing. When a raven tattoo rips itself from his arm to deliver a desperate message, Galharrow races to protect a mysterious woman who commands power in more ways than one. Together they discover that the towering Engine, a weapon that brought stalemate to eighty years of war, may have failed – and with its failure, the republic’s destruction approaches.  Even as they come under attack from dark immortals, they uncover a conspiracy within the citadel: traitors, flesh-eaters and the ghosts of the wastelands seek to destroy them, but if they cannot solve an ancient wizard’s paradox, the Deep Kings will take their terrible vengeance, and all will be lost.

“Blackwing quickly gained the rare distinction of being one of those books that felt as if it had been written especially for me…Ed McDonald handles the action with a deft hand and has created a compelling central character who remains likeable despite a lengthy list of flaws. A remarkably assured fantasy debut that mixes of the inventiveness of China Miéville with the fast-paced heroics of David Gemmell.”—Anthony Ryan, New York Times bestselling author of The Legion of Flame

“Blackwing is a bloody, gritty fantasy novel that manages not to sacrifice its heart.  I love the world, which feel strange and lived-in, and strength of the voice is fantastic.  Fans of Glen Cook’s The Black Company or Joe Abercrombie’s The First Law series will be very happy with this one.” – Django Wexler, author of The Guns of Empire

“This is an astonishingly accomplished debut – McDonald is definitely one to watch.” – Peter Mclean, author of Priest of Bones

“A real page turner? Check. Grizzled old soldier protagonist with regrets, a drink problem and a heart of gold? Check. Fiendish layered conspiracy for our Captain Galharrow to uncover? Check.
I heartily recommend this.” – Adrian Selby, author of Snakewood

RAVENCRY continues the story begun in BLACKWING, and the trilogy concludes with CROWFALL, all books out now in hardback, paperback, eBook, and audiobook formats. 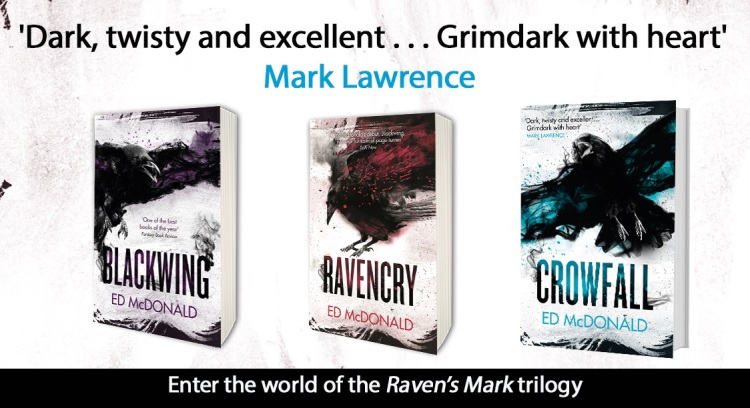